In the entire Val Belluna area there are small quarries, based on widespread stratified limestone with good mechanical and workability characteristics.

Nowadays few quarries are still working. High transportation costs are one reason, caused by their location in inaccessible areas. Dolomite stone can be found in Agordo valley and is variously coloured: from white to grey, according to where it is extracted. Black Dolomite stone has been used up. This stone is suitable for internal as well as external coatings, thanks to its resistance to atmospheric agents and water. It has been used since ancient times for stoups in village churches as well as in portals. Precious testimony of the use made of such stone is Villa Crotta in the centre of Agordo. Over time, Villa Crotta de’ Manzoni was modified and widened. Alessandro, son of Giovanni Crotta, finished the palace, embellishing it with a park about the year 1692. In the inner garden, standing on a large base, there are pagan gods and mythological characters made of Dolomite stone, as are the portico with ashlar columns, the portals with masks and some façade elements.

The sculptures, known as Pop or mut del Grota, are also found in the columns of the small external garden, which overlooks Piazza della Libertà: they represent figures wearing 16th– and 17th-century clothes and pagan gods inspired by Renaissance beauty standards. Giuseppe Segusini (architect, 1801-1876) records the methodical procedure followed during the process of relevant artistic works: first, stone was extracted and rough-hewn by stonecutters in the quarry. After transportation, rough-hewn blocks were processed by stonecutters and their assistants, considering the working difficulties they had. The ornamental elements were committed to ornament stonecutters on models made by the architect. A 1692 commercial act testifies how local stonecutters were supplied with stones suitable for sculpting statues for the Villa. Moreover, the name Lombardo appears in the act, an artist who was probably the one who worked for the Duomo in Belluno.

History teaches that the drawings were commissioned to an architect, while qualified stonecutters had to fulfil the task faithfully. Nowadays, the process is more or less the same, no doubt facilitated by modern instruments and electronic machinery. Insiders still use the old expression: “Stone is better than architects, because it doesn’t complain!”. Dolomite stone is nowadays extracted and processed by S.E.V.I.S., which realizes precious architectonic works for internal as well as external coatings. The material of a sometimes small size is recovered and conglomerated into a completely new Dolomite material (marble cement).

The conglomerate is a high-quality homogeneous mixture, in 235x142x80 cm vibro-tamped blocks. Its components are simple and natural Dolomia, water and Portland cement 52,2 granulates. Slabs can be worked with different finishes, as for stone. This natural material is suitable for Alpine as well as for modern environments. In particular, bathrooms are finished with cement stucco or resin: to make the stone more waterproof and for hygienic reasons, pores are filled up. The stone can also be finished with brushing or polishing. Another finish enhancing the material is sandblasting, which highlights the stone porosity by digging in the pores and giving an opacity effect, natural and rough to the touch. Thanks to their anti-slip properties sand-blasted floors are mainly used for exteriors.

THE COLOURS OF THE EARTH 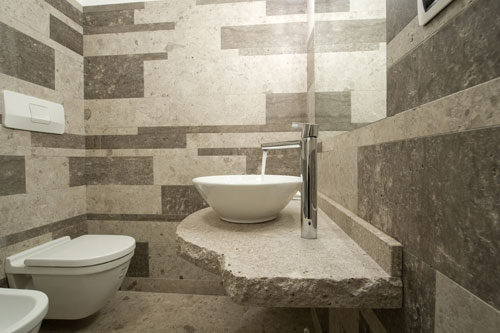 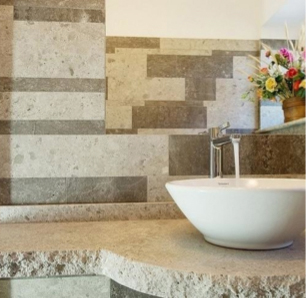 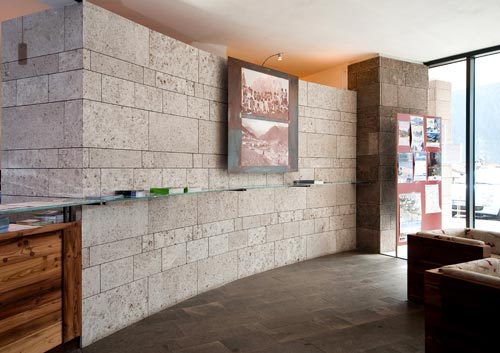 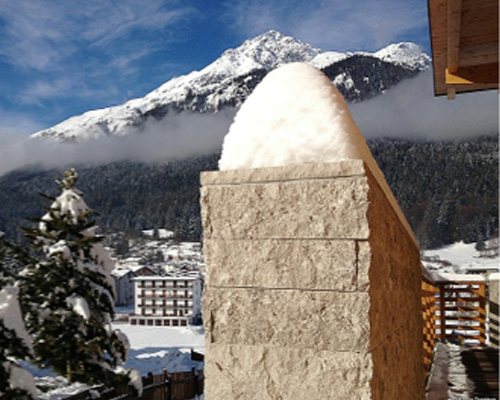 COATING FOR A HOTEL 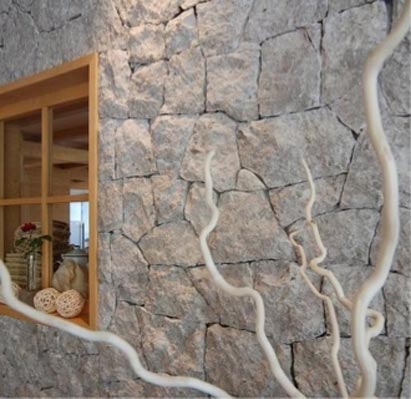 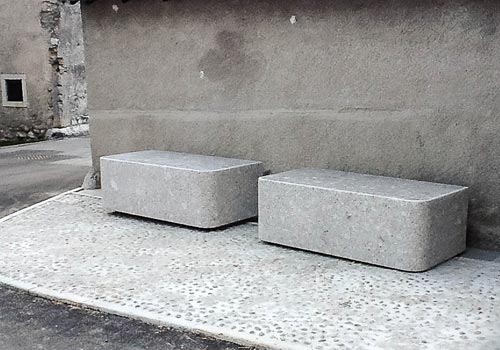 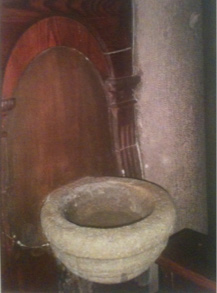 Round basin and column of the original church, Dolomite stone. Among the oldest products made in the village of Cencenighe. Parish curch, Cencenighe. (Photo from Sulle tracce degli scalpellini” book).

NEW PAVEMENT FOR THE CHURCH 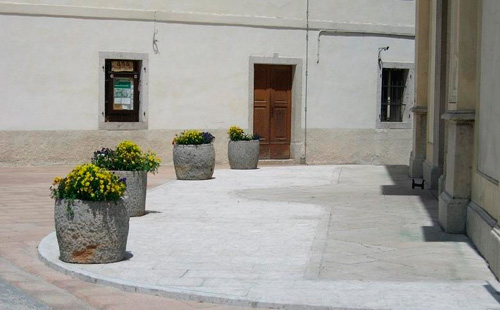 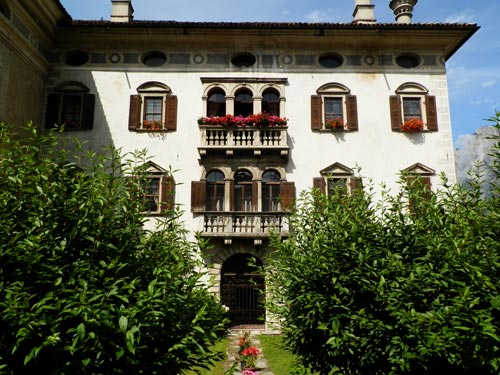 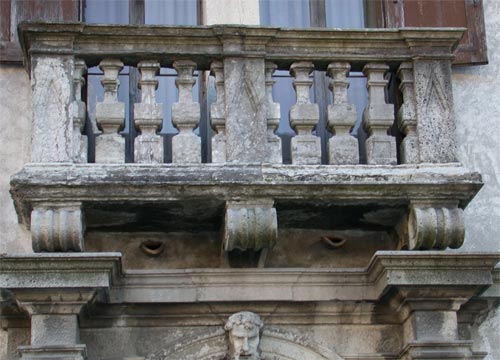 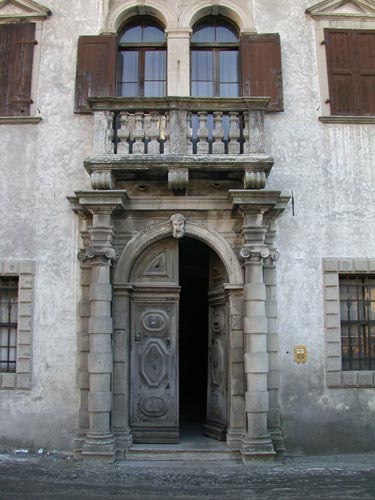 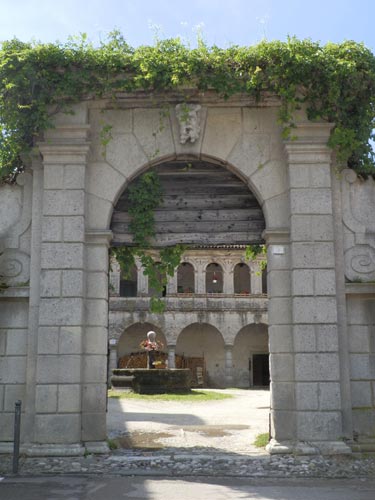 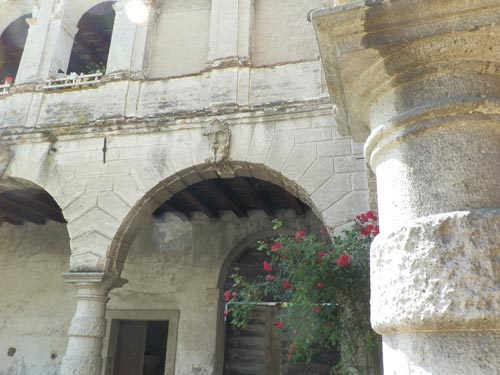 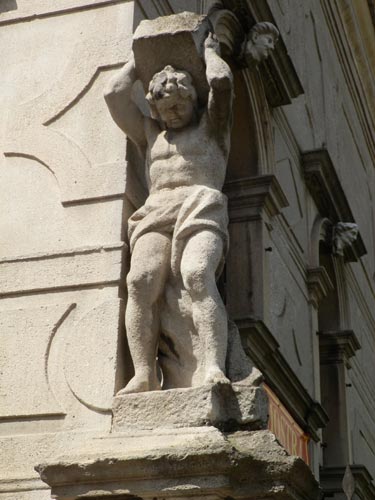 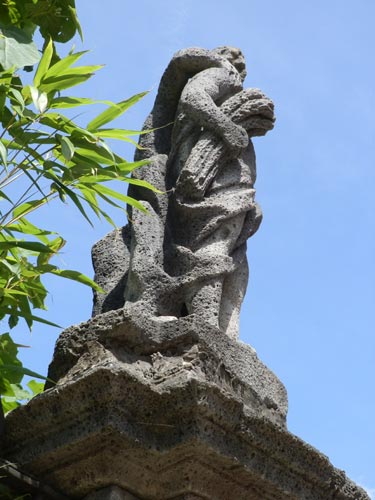 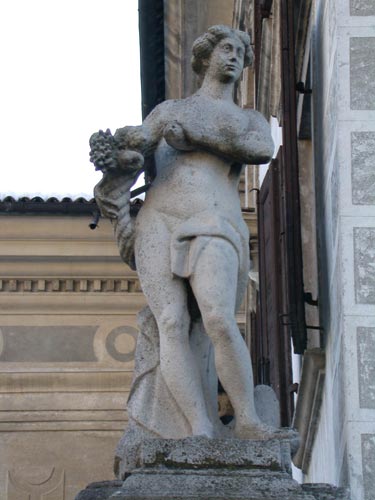 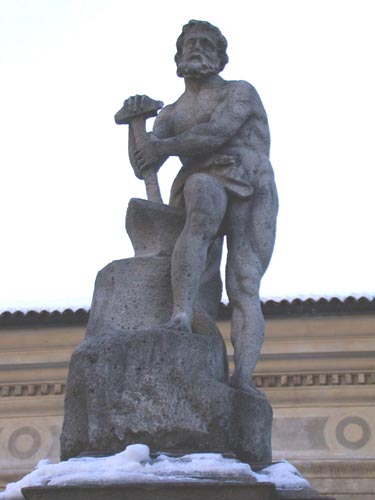 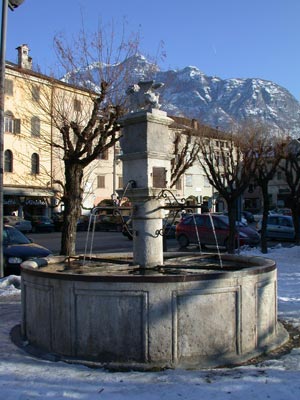 For an analysis of the features of the material go to the Dolomite stone technical page.